Case Law: Mutual Wills and a Subsequent Will—Which One Rules? 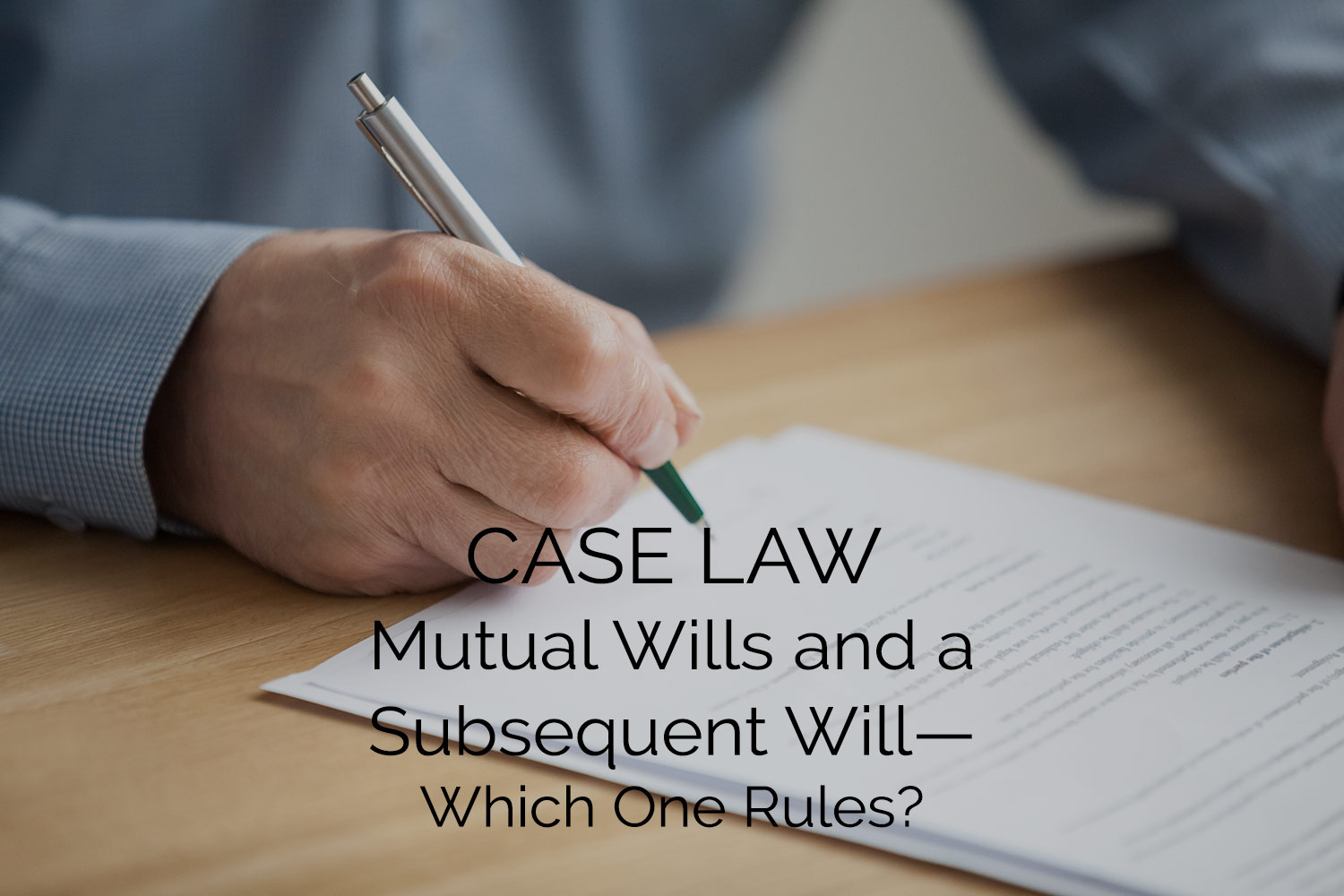 National Estate Planning Awareness Week is October 19-25, 2020. To celebrate, let’s take a look at some recent case law that deals with a mutual will and subsequent, traditional will.

A mutual will is one that is binding upon the Testator. Each Testator, usually married couples, those in a committed relationship, or ex-spouses, each draft a mutual will and the survivor cannot change its terms. But what happens when the survivor executes a subsequent will with different terms? Which one controls? How would a practitioner go about helping a client enforce a mutual will?

In this case, the probate division allowed the mother’s most recent, traditional will, against the appellant’s argument that it was executed in violation of a prior contract for mutual wills. The Supreme Court of Vermont affirmed the probate division’s decision, concluding that a contract for mutual wills may be enforced through a breach-of-contract claim.

The Testator was married to John McHugo and they had three children together before their divorce in 1978. In 1997, Testator and her ex-husband each executed a will in Arizona, containing the following language: “This Will is executed in consideration of a mutual will simultaneously executed by [the other] and the parties have agreed not to revoke or alter these Wills except with the mutual consent of both.” Each will established trusts for the support of the other former spouse for their lifetime, and provides for remaining assets to be divided equally among the children after both former spouses have died. In 2006, while living in Vermont, the Testator executed another will, revoking the 1997 will. This will divided most of Testator’s estate between two of her children, and excludes the ex-husband and third child (now the appellant). The ex-husband died in 2010, and the Testator died in 2016.

The issue of whether the Testator’s 2006 will revoked her 1997 will came before the probate division when a court-appointed special administrator filed a motion to allow the 2006 will. Appellant objected, having filed contractual claims in federal and state court in Arizona. The federal-court claim was dismissed due to lack of subject-matter jurisdiction, and the state-court proceedings were stayed pending the outcome in the Vermont probate case. Appellant filed a motion to disallow the 2006 will and allow the 1997, on the grounds that the 2006 will was invalid because the Testator had previously entered a valid and enforceable contract for mutual wills. Appellees argued that, under Vermont law, the 2006 will lawfully revoked the mutual wills. The applicable law states:

(A) by executing a subsequent will that revokes the previous will expressly or by inconsistency; or

The probate division decided that the 2006 will did indeed revoke her 1997 will, reasoning that under Vermont laws regarding revocation of a will by subsequent will, there is no exception for mutual wills. The court limited its opinion to this issue, and did not answer the question of whether there were any legal consequences for revoking the 1997 will.

On appeal, the appellant raises the question of what law should have been applied to address the question of whether the 1997 mutual will invalidates the 2006 will. She argues that the probate division should have applied Arizona law, and furthermore had jurisdiction to decide whether the 1997 contract could be enforced through contract law. Appellees contend that the probate division was not required to inquire beyond the existence of a validly executed Vermont will. The supreme court held that the probate court properly addressed whether to allow the 2006 will. Because she resided in Vermont at the time of her death, it was appropriate to apply Vermont law to determine the validity of the 2006 will. “In general, the validity of a bequest or disposition of personal property by will is governed by the law of the testator’s domicile at the time of death. In re Dennis’ Estate, 98 Vt. 424, 427, 129 A. 166, 168 (1925).”

The supreme court affirmed the probate division’s determination that, under Vermont law, the 2006 will is valid. This is so despite the notion that it violates the mutual will, which should not be considered regarding the allowance of the 2006 will, but instead should be pursued as a breach-of-contract claim. The supreme court remanded the case as to that issue.

This case highlights both that statutes are usually taken very literally and oftentimes don’t mention mutual wills as an exception to will revocation, and also that the place for a mutual will to be enforced is not as a probate claim but rather as a breach-of-contract claim.

If you're looking for ways to improve your estate planning practice, visit our partners at WealthCounsel.