Case Law: RLT Trust Property Can be Sold to Pay for Long-term Care 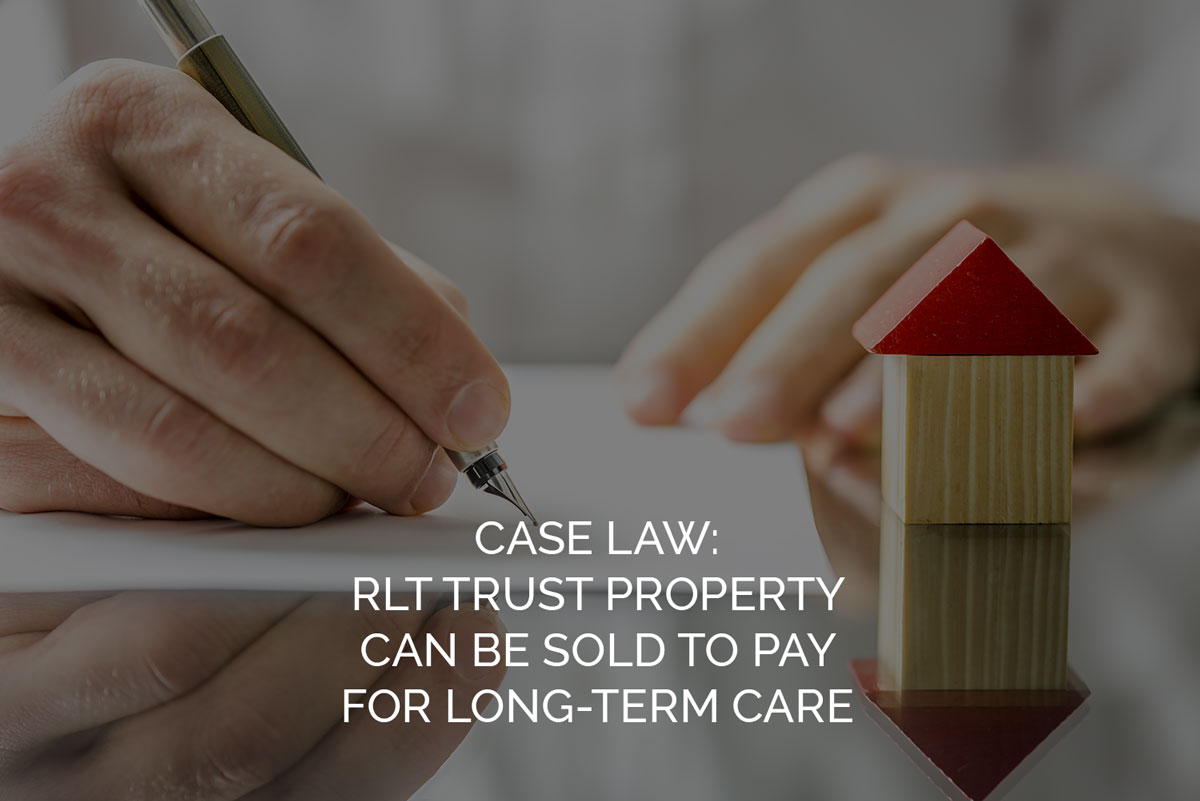 The trust in question in this case was executed by the settlors in 1994. These settlors reserved “the right and power to alter, amend, revoke, or modify [the Trust] in whole or in part without the consent of any other person” and appointed themselves the initial trustees. If one of the settlors died, became incapacitated, or resigned, then the other settlor would have the authority to act alone. Should both die or be otherwise incapable of serving as trustee, their sons would serve as co-trustees.

In 2010, the settlors amended the trust and changed the distribution of the property upon the death of both settlors. Originally, the property was to be sold by the trustees, subject to a right of first refusal held by their daughter, the beneficiary. The 2010 amendment eliminated that right of first refusal. Instead, a separate trust would come into being upon both settlor’s deaths, which would hold property for the beneficiary’s benefit for her natural life.

In 2018, one settlor was certified as incapable of managing her financial affairs. One month later, the other settlor was likewise deemed incapacitated. Accordingly, their son began serving as the successor trustee. Later that year, one settlor died, while the other remained a resident at an assisted living facility. The costs of care at the facility were approximately $3,500 per month. Section 6.2.b. of the trust provides that the trustee shall “pay or distribute to the surviving Settlor such amounts from the principal of the trust as the surviving Settler may request or as the trustee determines…to be necessary for the surviving Settlor’s care, comfort, support, welfare or maintenance.”

The successor trustee intended to sell the property to pay the monthly expenses for the surviving settlor’s care, comfort, support, welfare, and maintenance. He further intended to hold any remaining proceeds in trust and distribute to the beneficiary upon the surviving settlor’s death in accordance with the trust. Accordingly, he notified the beneficiary of his intent to sell the property. The beneficiary was at the time living rent-free on the property, as she had done since 1975. She refused to vacate the premises, so the successor trustee served her with a Notice to Quit Premises, and then filed a Complaint for Forcible Entry and Detainer in circuit court.

The supreme court reversed, holding that the trustee did in fact have the authority to sell the property for the benefit of the surviving settler. The district court had interpreted the trust as having granted the beneficiary a life estate in the property, which would preclude the trustee from selling it. The supreme court rejected this interpretation because it contradicted the trust’s distribution terms and the settlor’s clear intent that the settlors would benefit from trust property during their lifetimes. Specifically, the court referenced the passage of the trust quoted above, Subsection 6.2.b, and noted that these terms were consistent with the Wyoming Uniform Trust Code. And finally, the court determined that the beneficiary’s interest did not vest until the death of the last settlor. Since the beneficiary didn’t have a current vested interest, she could not preclude the sale of the home.