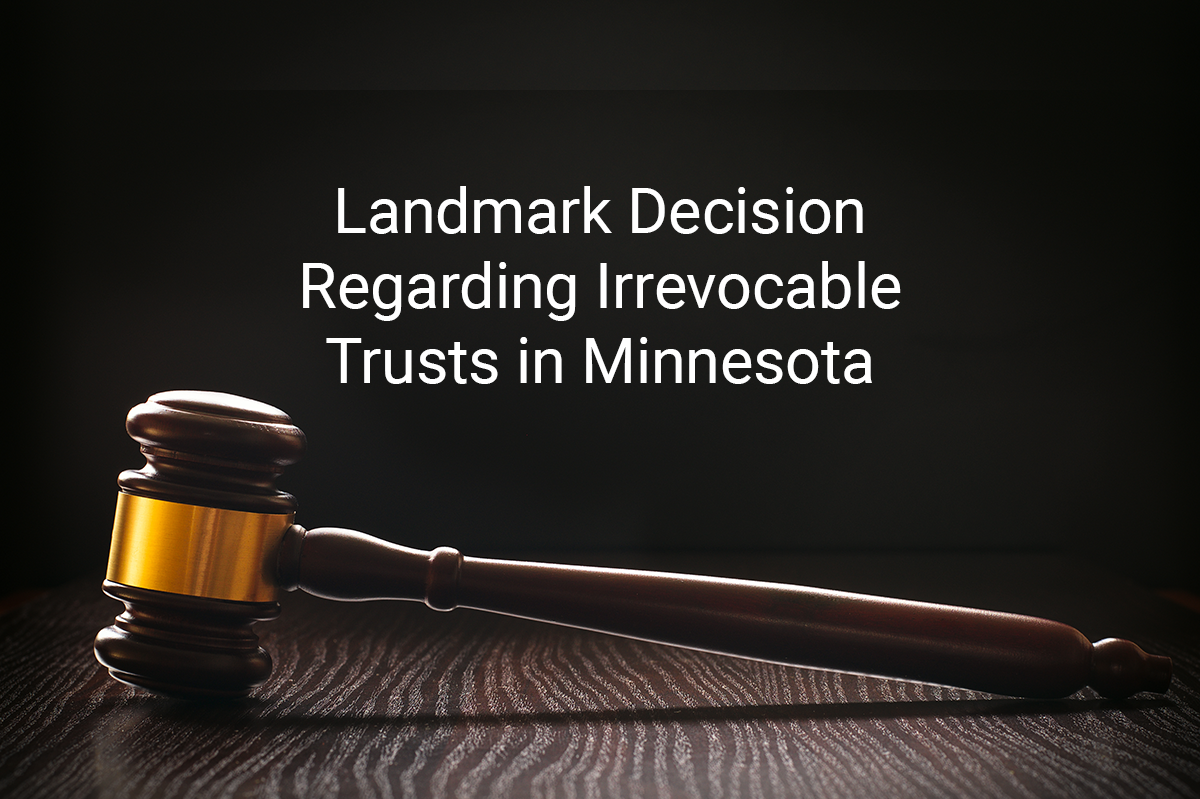 In a Minnesota appeals court decision, the court ruled that a Medicaid recipient’s irrevocable trust was not a countable asset and that Minnesota law on the matter is preempted by federal law. The decision turned long standing case law on its head, and gave the green light that an irrevocable trust can indeed be a non-countable asset for Medicaid eligibility purposes in Minnesota.

In this case, Geyen was the Grantor of two irrevocable trusts, which were identical except for their names. Her children were Trustees; her children and grandchildren were beneficiaries. Both trusts indicated their irrevocability and gave the Trustees “full power and authority to control” trust property. The trusts forbad the Trustees from loaning or gifting any assets to Geyen.

Geyen applied for Medicaid benefits and was denied due to trust assets. Geyen appealed the ruling. During the pendency of her case, Geyen needed care and there were no funds to pay for it. Geyen’s daughter received the dreaded letter from the care facility stating unless the account was rectified, Geyen would be discharged. The daughter, as Trustee, liquidated some trust assets. The daughter deposited the funds into Geyen’s personal checking account and then the nursing home was paid with those funds. Geyen’s daughter testified that her actions, in her opinion, violated the terms of the trust but she felt like she had no other choice.

Geyen appealed her Medicaid denial to the Commissioner. The state argued that the trusts became revocable by operation of Minn. Stat. § 501C.1206, which states in part:

Geyen argued that the Minnesota statute conflicts with federal law on the subject. A human-services judge found for the state, saying that the trusts were available assets. Geyen eventually appealed to district court.

During this time, Geyen passed away. The state argued that the case was moot due to this and also that Geyen eventually received Medicaid benefits. The state tried tirelessly to get the case dismissed. The court wasn’t buying these arguments and said that someone could be substituted for Geyen and that the residuary beneficiaries could have suffered a loss. On the merits of the case, the district court ruled in Geyen’s favor, stating that the irrevocable trusts “specifically precluded” the Trustees from loaning or gifting trust property to Geyen. The district court also ruled that the above-referenced Minnesota statute is preempted by 42 U.S.C. § 1396p(d)(3)(B).

The state appealed and now we have this ruling from the appeals court. The appeals court analyzed the applicable federal statute and determined that trusts are treated differently if they were revocable or irrevocable. The court noted the any circumstances test for irrevocable trusts – “if there are any circumstances under which payment from the trust could be made to or for the benefit of the individual”, then the trust is a countable asset.

The state argued that certain trust language made the trust an available asset under the any circumstances rule, including this language: “Trustee will have full power and authority to control and manage the Trust Estate . . . and to do all acts and things which Trustee, in the exercise of Trustee’s absolute and uncontrolled discretion, may deem needful, desirable, or expedient . . . .” However, the court rejected this argument because that language was qualified by other language that said “except as may be specifically required elsewhere in this Agreement.” Since the trust specifically said that funds could not be given, loaned, or gifted to Geyen, the trust was not a countable resource. The state pointed to a few other trust provisions that they claimed violated the any circumstances rule, however, their arguments were weak or nonexistence and the court ruled against them.

Notably, the state did argue that trust assets were available because they indeed ended up paying for Geyen’s care. The state argued that payment was made directly to the nursing home. The court was not persuaded, stating “Because the trust agreements prohibited the payment of trust funds to Geyen, the payment itself does not support the conclusion that the funds were available to Geyen under the terms of the trust agreements. And, even if the trustee had paid the care facility directly, that payment likewise would have been a prohibited gift to Geyen because the payment was for a debt that Geyen owed and the payment was voluntarily bestowed by the trustee without compensation. The commissioner’s argument to the contrary is unconvincing.”

The state’s next argument hinged on the state law that said an irrevocable trust automatically becomes revocable if someone applies for means-based Medicaid benefits. The court here wasn’t in agreeance. The court said that federal law clearly states otherwise and the federal law preempted.

In the end, Geyen wins her case, which was remanded to substitute a party for her. This is a joyous decision for elder law attorneys and advocates in Minnesota that want to engage in irrevocable trust planning that aligns with federal law. Also, practitioners in other states that are hostile to irrevocable trust planning can use this case as a blueprint to possibly move forward in their own cases.

ElderCounsel is dedicated to the professional development and full practice support of elder law attorneys across the country through education, collegiality, practice development, and a document creation system. ElderDocx helps law firms generate a wide array of elder law (including general estate planning), special needs planning and Veterans pension planning documents. The Medicaid Asset Protection Trust is one of the most popular documents created in ElderDocx. Download a preview today!