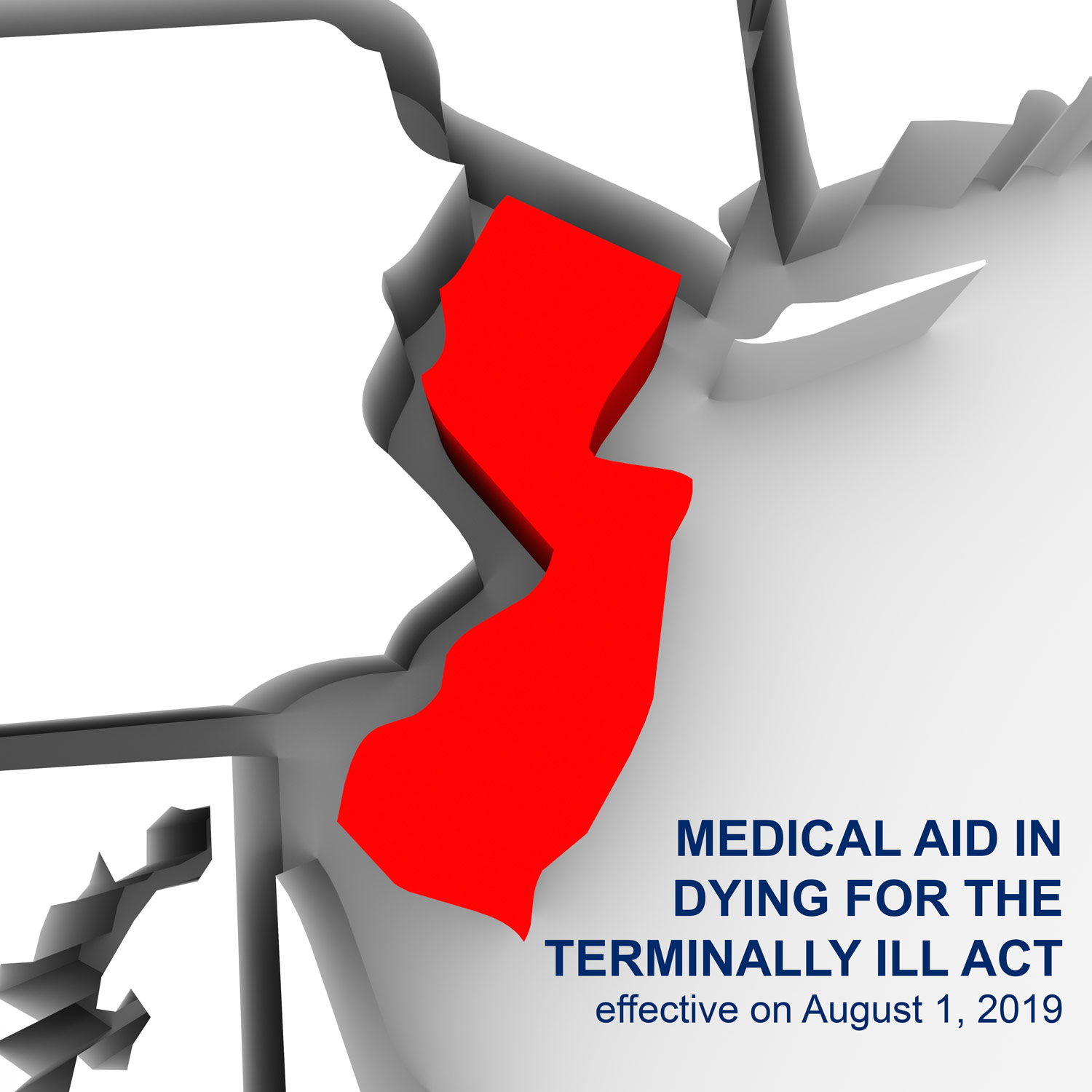 Thank you to our guest blogger Anita Schnee, J.D. for leading this conversation on medical aid-in-dying.

The right to choose when to die, for a person suffering from a terminal illness, is increasingly recognized here and abroad. Now New Jersey becomes the ninth state to allow adults, who are diagnosed with six months or less to live, to obtain medication to end their lives.1

Many people whose medical condition can no longer be treated effectively want to avoid what they see as unnecessary suffering, deterioration, and loss of dignity. For those, the power to end life before its natural course has run is an inviting one. Opponents, however, fear that elderly, poor, and disabled patients could be subjected to pressure, from family members or unscrupulous doctors, into premature death. Others object based on their belief that life is a sacred gift and that humans do not have sovereignty over when it ends.

“I am torn between . . . my faith and my compassion for those who suffer . . . unnecessary, and often intolerable, pain at the end of their lives. . . . Some . . . may thoughtfully and rationally wish to bring an end to their own suffering . . . . As things now stand, it is the law, rather than one’s own moral and personal beliefs, that governs such decisions. That is not as it should be. . . . [W]hile my faith may lead me to a particular decision for myself, as a public official I cannot deny this alternative to those who may reach a different conclusion. . . .”

Statutes like New Jersey’s take a common form.2 Patients must be at least 18 years old, retain decision-making capacity, have received a prognosis of six months or less, and be capable of taking medication themselves. Treating and attending physicians then determine that the patient meets the qualifications; the doctors inform the patient as to the risks, benefits, and alternatives; and they confirm that the patient has reached the decision rationally. The physician then writes the prescription and the patient takes the final act that causes death.

The New Jersey statute, the “Medical Aid in Dying for the Terminally Ill Act,” is effective on August 1, 2019.

Many Americans favor physician-assisted suicide, often called “Medical Aid in Dying (MAID).” In 2017, nearly half the states were considering MAID bills and there is increasing support from health-care professionals and medical associations.3

On the other hand, many states criminalize MAID. For example, Arkansas statutes specifically provide that the act of physician-assisted suicide is a felony punishable by three to ten years’ imprisonment and a fine of up to $10,000.00.4

However, if MAID criminal cases do make their way to prosecution,5 jury nullification is common. For example, physician Timothy E. Quill publicly confessed, in a 1991 article in the New England Journal of Medicine, that he participated in MAID in New York, a jurisdiction that criminalizes such action. A grand jury declined to indict him.6 Likewise, Michigan juries repeatedly refused to convict physician Jack Kevorkian, a highly controversial7 right-to-die advocate in the 1990’s.8

Still, the controversy remains live. Opponents protest that premature ending of life forecloses on relational and spiritual healing that can emerge at time of approaching death. Those who hold fast to the belief in the sanctity of life argue that the power of choice wrongly prioritizes personal preferences over value that exists even when the person living that life no longer wants it. “The deliberate act of ending a life makes a ‘somebody’ into a ‘nobody.’”9 British journalist Brendan O’Neill notes: “Saying to people, ‘Well, maybe your life isn’t worth living and maybe you should give up,’ is ‘moral defeatism.’”10

There is a fine line between the widely established, “passive” right to refuse life-prolonging medical treatment, and the more-controversial “active” MAID right to end life. As Chief Justice Rehnquist put it in Quill, the difference is the “distinction between letting a patient die and making that patient die.”11

In the well-recognized “passive” choice, the patient declines treatment interventions that are overly burdensome, to minimize suffering and maximize dignity. The “active” right of MAID choice, on the other hand, is within the criminal canon because of the presence of the specific intent to cause death. The Quill Court found this distinction between “active” and “passive” was a rational one, albeit sometimes unclear, but nevertheless sufficient to justify upholding New York’s ban on MAID. The distinction favoring the “passive” choice is “widely recognized and endorsed in the medical profession and in our legal traditions.”12

However, in a 2017 article written by emergency-room doctors and a lawyer, some doctors stated a different view: “We do not feel that the difference [between ‘active’ MAID and ‘passive’ refusal of life-prolonging treatment] is large enough to justify prohibiting one and permitting the other. . . . when both forms . . . are intended to minimize suffering and convey respect for patient as a person.”13

The doctors also noted the need to ensure that patients receive care and attention that, they hoped, would minimize the need to resort to MAID. “Given that patients most commonly request [MAID] because of concerns over loss of autonomy and fear of dying in pain, assurance of excellent palliative care and lack of abandonment during suffering will help to minimize requests for [MAID]. However, such requests may persist even after such assurances and after achieving excellent symptom control.”14

There is no doubt that euthanasia – the deliberate, direct causation of death by a physician  – remains beyond the pale for most people in this country, especially, of course, if done without the patient’s informed consent.15 But where the decision to end one’s life is based on a voluntary, thoroughly considered request in the presence of terminal illness and impending death, more and more jurisdictions are declining to require that life should be prolonged at all costs, especially not if the patient feels the suffering involved is not worth the cost.

1The other jurisdictions are California, Colorado, Oregon, Vermont, Washington, Hawaii, Montana, and the District of Columbia.

2The power to choose to end life is not a constitutionally guaranteed right, but, rather, legislatively enacted. Washington v. Glucksberg, 521 U.S. 702, 728 (1997) (assisted suicide held not liberty interest protected by substantive due process); Quill v. Vacco, 521 U.S. 793 (1996) (no equal-protection violation in banning assisted suicide but permitting refusal of life-prolonging treatment).

5Such cases are often not pursued. For example, despite Arizona’s ban on MAID, the City of Bisbee passed a resolution in 2015 requesting the Cochise County attorney to use prosecutorial discretion to de-prioritize cases against those who have supported, been present at, or facilitated a loved one's death in terminal situations. Arizona right-to-die advocates persevere in introducing MAID bills in the legislature, the most recent effort being in January 2019.

6Dr. Quill was a plaintiff in a challenge to New York’s ban on MAID. The United States Supreme Court upheld the ban in Quill v. Vacco, 521 U.S. 793 (1997). MAID bills are currently under consideration in both houses of the New York legislature.

7Autopsies conducted on several of the many people Dr. Kevorkian assisted to die revealed no physical illnesses. Apparently these people simply wanted to end their lives for psychological reasons. The MAID statutes guard against this exercise of choice by restricting it to physician-verified terminal illness.

8Dr. Kevorkian was acquitted in cases where he supplied patients with a machine administering the lethal drugs and the patients operated the machine themselves. He was convicted of second-degree murder, however, when he crossed the line to active euthanasia in the killing of ALS patient Thomas Youk. Kevorkian videotaped himself injecting Mr. Youk with lethal drugs and the tape was aired on the CBS television program “Sixty Minutes.” Kevorkian served just over eight years of a ten to 25-year prison sentence.

14Physicians who object to MAID may decline to participate in it, provided their refusal does not jeopardize the MAID rights of patients who have them. People in the emergency room or intensive-care units have little or no ability to choose their attending physician, so doctors who conscientiously object to MAID must transfer patients to other physicians who do not object. Care must be taken to ensure that the patient or the patient’s health-care agent has meaningful access to MAID information, treatment, and freedom from invidious discrimination.

15Euthanasia is legal in Belgium and the Netherlands, but only if the patient has the decisional capacity to consent to it.