Montana Confirms an Irrevocable Trust can be an Exempt Asset 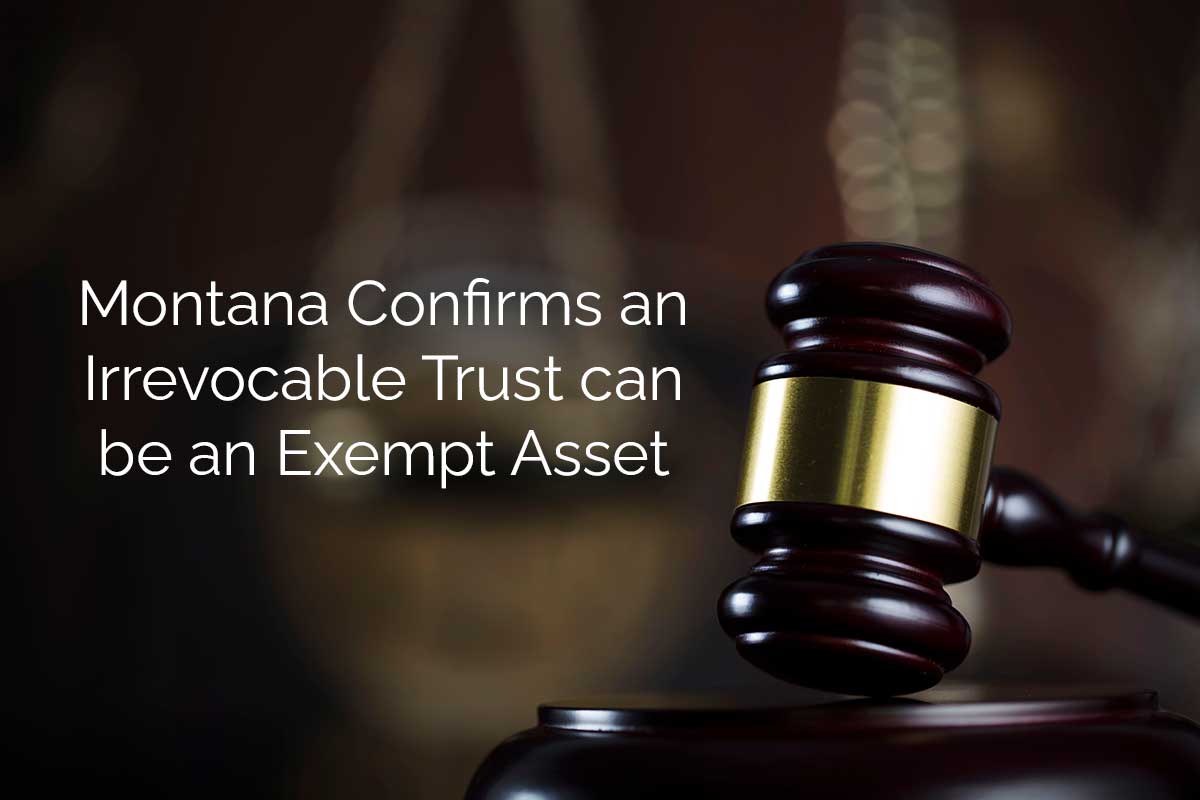 Yesterday, you were alerted to the groundbreaking decision out of Minnesota that confirmed an irrevocable trust could be an exempt asset regarding Medicaid eligibility and struck down state law that contradicted federal law on the matter.

Now, let’s discuss a similar case out of Montana.

In this case, Marilyn owned a home. Her sister, Glenda, moved into it with her. In 2008, Marilyn sold to Glenda a one-half interest in the home. Thereafter, both sisters established an irrevocable trust and transferred their respective shares of the home into the trust. In 2016, Marilyn’s health was failing and she needed care. She entered a nursing home and applied for Medicaid the next year. Her application was denied because the state counted the trust property in her eligibility determination.

Marilyn requested a fair hearing and an Administrative Law Judge upheld the denial. Marilyn again appealed and the district court did rule that the trust was irrevocable. However, the court ruled that the trust assets were still available because there was a violation of the any circumstance rule of 42 U.S.C. § 1396p(d)(3) because should the trust be terminated “the beneficiaries could thereafter, individually, jointly, directly, or indirectly, give Marilyn this trust property for her benefit.” Marilyn again stood her ground and appealed. Now we have this decision from the Supreme Court of Montana.

The state argued that the district court was correct because the any circumstances test should include an analysis of “imaginary or improbable circumstances.” The state also argued that because Marilyn benefited from the trust assets during her lifetime, that amounted to asset ownership. Because Marilyn was allowed to live in the home and benefit from it, it should be countable.

The court looked at the terms of the trust and determined that its primary purpose was to supplement public benefits. If the trust were terminated, as the state argued could be a circumstance in which Marilyn would benefit from trust principal, then the trust’s material purpose would be defeated. If a court were to order the termination of the trust, it would be in error and against the terms of the trust. The Supreme Court here said it was wrong to construe the any circumstances test to encompass a court’s misinterpretation of a trust document.

The court went on to say that the ability to live in a home owned by the trust doesn’t grant that person access to the trust’s corpus. The residence is owned by the trust; if it is sold, the proceeds would be held according to the terms of the trust. Marilyn could not sell or transfer the home. The trust does say that Marilyn would be responsible for insurance, repairs, taxes, utilities, etc. The state did not put forth an argument as to how any of these types of payments from Marilyn to a third party would amount to a “circumstance under which payment from the trust could be made to or for” Marilyn’s benefit.

Another win for elder law attorneys and advocates. Are more states finally recognizing that they must conform to federal law on this matter, or are these issues only now being litigated by brave Medicaid recipients? Whatever the case may be, let’s keep it up!

ElderCounsel is dedicated to the professional development and full practice support of elder law attorneys across the country through education, collegiality, practice development, and a document creation system. ElderDocx helps law firms generate a wide array of elder law (including general estate planning), special needs planning and Veterans pension planning documents. The EC Medicaid Asset Protection Trust® is one of the most popular documents created in ElderDocx. Download a preview today!