President Trump's October Executive Order and the Impact on Obamacare 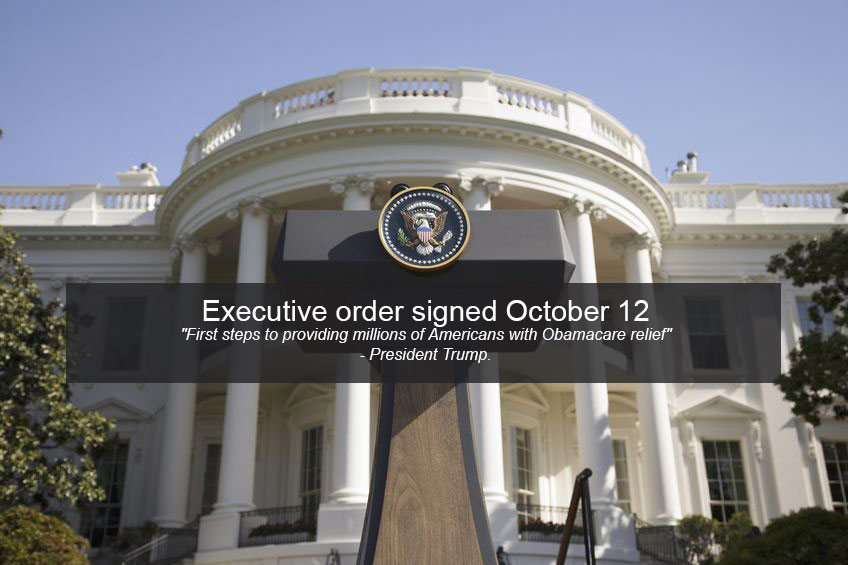 On Thursday, October 12th, President Trump signed an executive order aimed at taking action on Obamacare.  Trump said the order is "starting that process" to repeal Obamacare.  It will be the "first steps to providing millions of Americans with Obamacare relief," Trump said.  Administration officials hinted that the Order is just the beginning of the administration’s actions related to the goal of unraveling the current health-care law.

Experts carefully monitoring the President’s actions warned the order could undermine the stability of Obamacare markets by opening up leaner and less expensive plans that would divert healthy people away from Obamacare plans.

Democrats warn that the order is part of Trump’s larger plan to “sabotage” the health-care law and accomplish what Congress could not after several failed attempts to repeal Obamacare.  The Order, along with administration cutbacks which include a 90 percent cut to the advertising budget to outreach about the coming Obamacare enrollment period that begins Nov. 1, are indications the President will continue to find ways to fulfill his campaign promise.  The full impact of the executive order will not be immediately clear. The order itself does not make changes; rather it directs agencies to issue new regulations or guidance. Those new rules will go through a notice and comment period that could take months, officials said.  Trump’s goal is to expand the ability of small businesses and other groups to band together to buy health insurance through what are known as association health plans (AHPs). It also lifts limits on short-term health insurance plans.

Because both of these types of plans do not have to follow the same ObamaCare rules, such as minimum benefits standards, experts warn that healthier people could join these cheaper plans and leave only sicker people in ObamaCare plans. That could lead to a spike in premiums for ObamaCare plans or insurers simply dropping out of the market.

The American Hospital Association criticized the order, warning that it could "put patients at risk" and "destabilize" the market. The organization warned that the order opens up the ability for people to buy plans with fewer benefits and fewer protections. The order does not address whether individuals can join association health plans, a move which would have made it broader and deepen its effects on the ObamaCare market.

ElderCounsel understands the need for attorneys to stay informed as new laws are considered and current health-care laws are changed.  We will continue following these issues closely to make sure our members stay on top of these important issues, and are well equipped to pass this information on to their clients. For more information about ElderCounsel contact us online or give us a call at 888.789.9908, option 3.