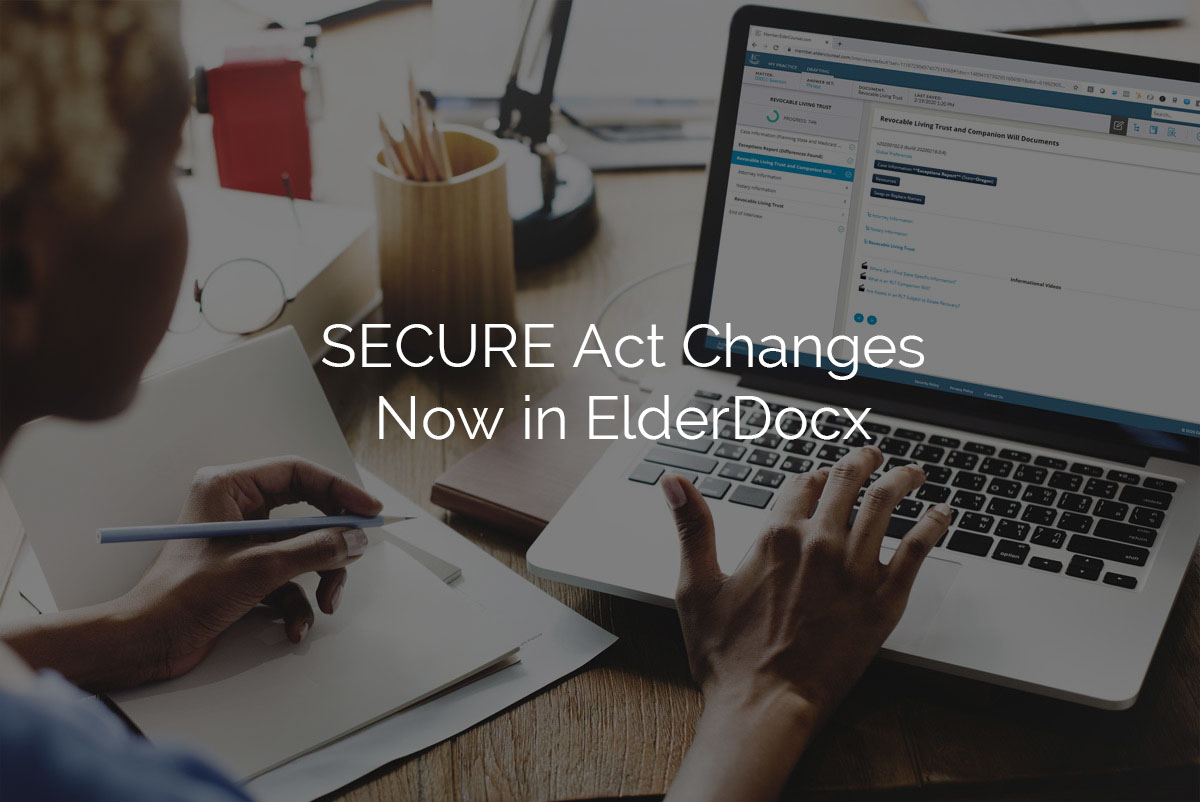 Great news! In response to the SECURE Act, the provisions of ElderDocx have been updated. The SECURE Act has been big news in the elder law and estate planning communities recently. The Act was incorporated into the Further Consolidated Appropriations Act of 2020 and was signed into law on December 20, 2019. The new law was set to become effective just a short time later, as of January 1, 2020. This left attorneys scrambling to read and understand the new law, interpret the provisions therein, and figure out how to best draft trust provisions and advise clients on the implications of the new Act.

However, there hasn’t been consensus in the legal community about the interpretation of the Act, and thus the impact on trust planning for retirement account assets. Chief among the differences of interpretation include whether accumulation trust provisions will work for certain eligible designated beneficiaries. Contained in the new Act is a new definition for eligible designated beneficiaries:

(I) the surviving spouse of the employee,

(II) subject to clause (iii), a child of the employee who has not reached majority (within the meaning of subparagraph (F)),

(IV) a chronically ill individual (within the meaning of section 7702B(c)(2), except that the requirements of subparagraph (A)(i) thereof shall only be treated as met if there is a certification that, as of such date, the period of inability described in such subparagraph with respect to the individual is an indefinite one which is reasonably expected to be lengthy in nature), or

(V) an individual not described in any of the preceding subclauses who is not more than 10 years younger than the employee.”

When read in conjunction with the other new provisions of the Act, it is debatable whether accumulation trust provisions will work for all such beneficiaries, or just some of them. Some professionals in the community believe that only conduit trusts will work for certain eligible designated beneficiaries. Such attorneys reached this conclusion by interpreting IRC 401(a)(9)(H)(ii) and IRC 401(a)(9)(H)(iv) to mean that contingent beneficiaries are included in the definition of beneficiary under the Code and that the special rule for multi-beneficiary trusts is actually an exception. Our position is that under the Code, beneficiary means an individual who is presently entitled to receive retirement account proceeds (or distributions from a trust) at the death of the employee. One can reach this conclusion by reading the Code and applying both interpretations elsewhere where beneficiary is used to see if either definition could hold true. When doing this, IRC 401(a)(9)(H)(iv)(I) wouldn’t make sense if the definition of beneficiary included contingent beneficiaries. With regard to the second argument, that the special rule for multi-beneficiary trusts is actually an exception, we simply look to the plain meaning of the text. It is a special rule, not an exception. And if the legislators wanted an exception, they would have called it such, as they have done elsewhere in the Code.

We don’t use conduit trust provisions in ElderDocx, as they are contrary to special needs planning. Our interpretation of the SECURE Act does allow for an accumulation trust for the surviving spouse and others. However, because of the uncertainty of the new provisions and the various interpretations in the community, we want to be flexible with our trust planning. Because of this, we made the new accumulation trust provisions in ElderDocx able to account for and work with both interpretations of the new Code. Whether a beneficiary is entitled to stretch retirement account withdraws over their life expectancy and whether contingent beneficiaries must be considered when calculating such stretch is left to trust administration. This is a decision for the Trustee when the time comes. Until we have further guidance via new regulations, we will have to leave the final interpretation to the Trustee. But the good news is that we have drafted our accumulation trust provisions to be flexible enough to allow results under both interpretations, which is in the best interest of you and your clients.

We have a webinar scheduled to learn more about the SECURE Act, Encore: New Opportunities Under the SECURE Act on February 28 at 2:00 p.m. ET. Or members can watch the previously recorded webinar here. As always, we are responsive to new federal and state laws and will keep you up-to-date on any new regulations regarding the SECURE Act or legal changes affecting you and your clients.

2:00-3:00 p.m. ET: ENCORE! (Original Webinar Rebroadcast)
How will your planning and drafting change under the new SECURE Act provisions? What opportunities are available for disabled and chronically ill persons under the Act? We’ll explore this and more during this segment.

3:00-3:30 p.m. ET: LIVE!
Stephen Dale and Brian Albee will join us live to show the new language in ElderDocx and answer any questions you have.