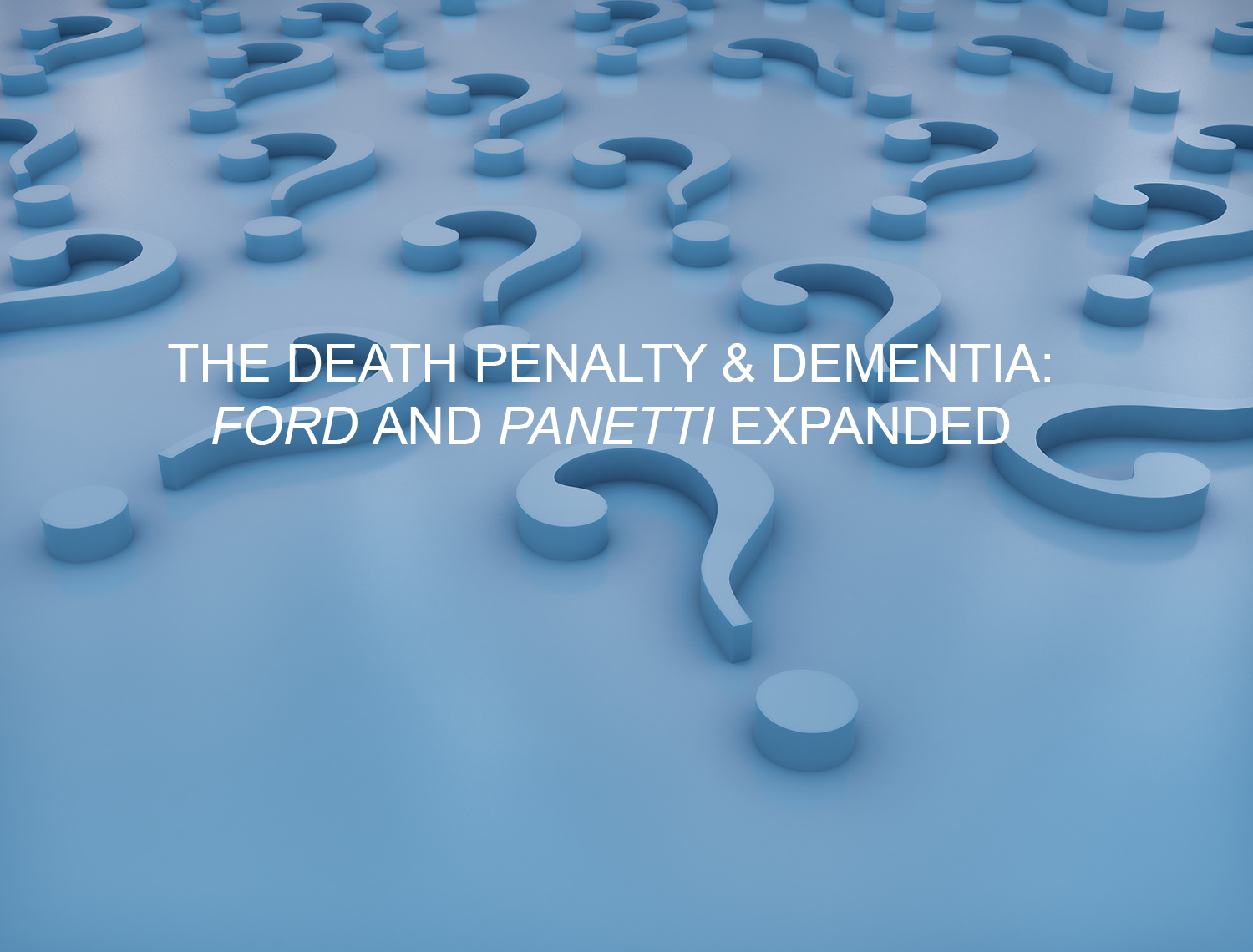 The Eighth Amendment declares that cruel and unusual punishments cannot be inflicted upon prisoners.  This law has been construed to protect some prisoners suffering from delusions and psychotic episodes from execution. Now, this safeguard can also apply to those suffering from dementia and other diseases of the mind.

An egregious murder has been committed. The perpetrator has been caught, tried, found guilty, and sentenced. The sentence is death. This is a pretty standard example of our justice system at work – everything seems arguably fair and judicious (in death-penalty states). Our system permits such punishments for their retributive importance.

Now consider: years later on death row, the aforementioned convict has begun to suffer from psychotic delusions and insanity and cannot fathom why he would be slain. This person can no longer be executed for their crime under the laws of our country. Their execution would now violate the Eighth Amendment of the Constitution.

But what if the prisoner developed a different disease of the mind – one not analogous with insanity? Would this kind of comparable misconception of reality qualify a person to be saved from execution? This is just the question the Supreme Court of the United States recently addressed.

The Supreme Court recently decided the case of Madison versus the state of Alabama. (Madison v. Alabama, 586 U.S. _ (2019) Petitioner, Vernon Madison, was found guilty of capital murder and sentenced to death. Years later, he suffered a series of strokes, causing vascular dementia, which rendered him unable to recall the events of his crime. He was determined not to suffer from psychosis or delusions, but was suffering from a distinguishable mental disease. He petitioned for stay of execution based on his mental state.

The question that the Court addressed was whether Ford and Panetti, which could prevent a psychologically disturbed person from being executed under the Eighth Amendment, could also apply to a person with dementia-related mental deficiencies.

Ford v. Wainwright, 477 U.S. 399 (1986). Ford established that the Eighth and Fourteenth Amendments prohibit the execution of an insane person. Thus, a sentenced prisoner cannot face execution after they have lost their sanity. Ford developed delusions due to paranoid schizophrenia long after he had been sentenced for first-degree murder. The Court determined that to execute such an individual suffering from insanity would “simply offend humanity.”

Panetti v. Quarterman, 551 U.S. 930 (2007). In Panetti, the Court expanded upon Ford and established a more defined, but not yet definitive, standard upon which Ford would be applied. Panetti, like Ford, suffered from increasingly psychotic delusions after being sentenced for the murder of his wife’s parents. The Court reasoned that to justify an execution, the prisoner must be capable of understanding the connection between their actions and the punishment.

Precedent Applied to the Current Case

The Court opined that for Ford and Panetti to apply, a death-row inmate must have a mental affliction that impedes their ability to understand the nexus between their actions and their execution. The focus is on the ability to understand – not the affliction. “The sole question on which Madison’s competency depends is whether he can reach a rational understanding of why the state wants to execute him.” (emphasis added)  The Court wrote “Do you recall your first day of school? Probably not. But if your mother told you years later that you were sent home for hitting a classmate, you would have no trouble grasping the story. And similarly, if you somehow blacked out a crime you committed, but later learned what you had done, you could well appreciate the State’s desire to impose a penalty.”  However, on its own, the understanding of facts giving rise to a punishment does not create a presumption that there is understanding of the resulting punishment.

It was less important to the court to focus on what caused the competency issue. Whether Madison remembers the origin of his offense does not necessarily affect whether he is capable of understanding why he is being put to death. Someone may forget what they have done, but they may still be able to appreciate why they would be punished for having done it.  Such an execution would not violate Ford and Panetti.

The Supreme Court opined that delusion and psychosis are not prerequisites for the application of Ford and Panetti. Instead, a prisoner may fall under these protections by suffering from a wide variety of other mental afflictions that create a similar result in not comprehending why a prisoner should be executed. The question regards the competency of the individual – not the reason for its absence.

Rage Against the Majority

An obviously frustrated Justice Alito provided a heated dissent; chastising the majority for answering a question that was never actually asked. The Justice’s position was that the Court overstepped its limitations by answering the question of mental afflictions generally and not limiting its answer to memory loss and the Eighth Amendment.

The dissenting judge argued not so much about the decision of the Court, but about the procedure it violated by answering the question. A petition for writ of certiorari asks the Court to answer a particular question of law. The Court is to focus on only this question in their answer, not to use the opportunity to also address a remote issue. Despite the stark disagreement as to whether the questions the majority answered were or were not reasonably implied in the questions actually asked by Petitioner, the majority justifies its direction by pointing out that the original question implies concern over all mental afflictions – not limiting its answer to memory loss alone.

It seems as though the dissenter would have liked to see more of the word “understanding” in relation to the prisoner and his crime – or more obvious words like “competency” – in order to feel comfortable taking on the question answered. The dissent’s position is that the question asked was about memory loss, not competency or understanding.

Nonetheless, the majority answered the question as to the sufficiency of one’s comprehension of punishment; not solely on the consequences of memory loss.

Our judicial system focuses on a punishment’s retributive purpose and effect. The punishment must fit the crime. However, it offends our societal standards of human decency to execute a person that cannot understand the reason for their punishment. Therefore, the punishment must really fit the crime and the mental capacity of whom is being punished.

The majority feared that lower courts focused solely on whether Madison had psychotic episodes and or delusions in making their determination that Panetti and Ford did not apply. Previous application of Ford and Panetti would reasonably lead a court to assume that delusions or psychosis are needed to qualify, but now, such application will reach beyond psychological afflictions towards other diseases of the mind.

Whether Madison’s dementia-induced memory loss will save him from execution is yet to be determined. It is up to the state court to consider his mental state, ascertain his level comprehension regarding why the state seeks to punish him, and determine whether there is a sufficient finding the he is or is not competent under Ford and Panetti, given this new guidance.