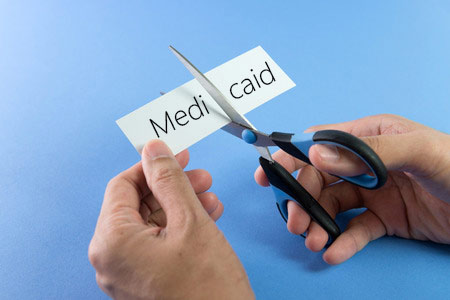 Several news organizations have spent the last few days trying to figure out exactly how much President Trump wants to carve out of Medicaid, which covers more than 70 million low-income children, adults, senior citizens and disabled Americans.  "It's north of $610 billion, but it's not $1.4 trillion," according to a senior official from the White House Office of Management and Budget.

While Congress isn't expected to approve Trump's budget wish list, it does provide insights into how the administration would overhaul Medicaid (a program the President swore he wouldn't touch).  The White House's budget summary tables show that reforming Medicaid would save $610 billion over the next 10 years. The savings are realized by turning it into either a block grant, which would give states a fixed level of funds, or a per capita program, which would send states a set amount of money based on enrollment. Either one could greatly reduce federal support.

The GOP health care bill would also make those changes, but the Trump budget would go even further, according to White House Budget Director Mick Mulvaney. That legislation, which also calls for eliminating enhanced funding for Medicaid expansion under Obamacare, would reduce spending on the program by $839 billion, according to the latest Congressional Budget Office analysis. Mulvaney told lawmakers on Wednesday that the reduction in Medicaid spending from the president's budget and the House bill can't be added together because they "contain some of the same factors."

The confusion has left many health care and budget experts across the political spectrum guessing at the figure. Many say it looks like the White House would combine its Medicaid spending cuts ($610 billion) with the House bill's reduction ($839 billion) for a total of around $1.4 trillion. This would equal nearly half of the program's budget in 10 years.  "Ultimately, Medicaid would face a nearly 50 percent cut in the year 2027 relative to current law," the Concord Coalition, a deficit watchdog group, said Tuesday.  The conservative Heritage Foundation and the liberal Center on Budget and Policy Priorities agreed that the spending reductions appeared to be additive. Cuts of this size would have a devastating impact on Medicaid, said Robert Greenstein, the center's president. "Under the budget, states would face even deeper Medicaid cost-shifts and feel compelled to impose further cuts to Medicaid benefits and eligibility in order to cope with the diminished federal Medicaid funding they would receive," he said.

It's highly unlikely, however, that the cuts proposed in the budget will pass Congress. Paul Howard, director of health policy at the Manhattan Institute, calls it "DOA as most presidents' budgets are."  The budget does show, he says, that President Trump wants to "double down on Medicaid efficiency."  It will be very difficult to cut Medicaid by so much in the Senate, where about a dozen Republican senators are from states that expanded Medicaid under the ACA and "don't want to lose that," unless the phase out is very gradual, says Howard.

Any savings from entitlement programs will lead to higher costs in other areas, says Dennis Hobb, executive director of the Washington-based McClendon Center, which offers mental health services.  "I don't think we want to see more people going to jail, in the hospitals and in the streets," says Hobb. "If Medicaid is slashed like it's been proposed, so many people won't be able to get any care. They're much more likely to re-offend."

Daniel Blum, CEO of Phelps Hospital in Sleepy Hollow, N.Y., says dramatic Medicaid cuts "widen the gap between the “haves” and “have nots” in this country, worsen the health problems already plaguing millions of Americans, and continue to drive up the cost of caring for them."  Blum isn't "adverse to change," and says health reform is needed. But he worries the ripple effect of such huge cuts would affect his state's budget, causing a "cascade of events that could lead to economic austerity through unintended consequences."

More than 130 million Americans have one or more chronic medical conditions, accounting for about 86% of the more than $3 trillion spent on health care in the United States, according to federal studies.

ElderCounsel will continue to follow this topic, as well as the American Health Care Act recently passed by House Republicans that would also slash Medicaid spending. Contact us to learn more about ElderCounsel membership.