Trusteeship and Agency: Where do Creditors Fit into the Picture? 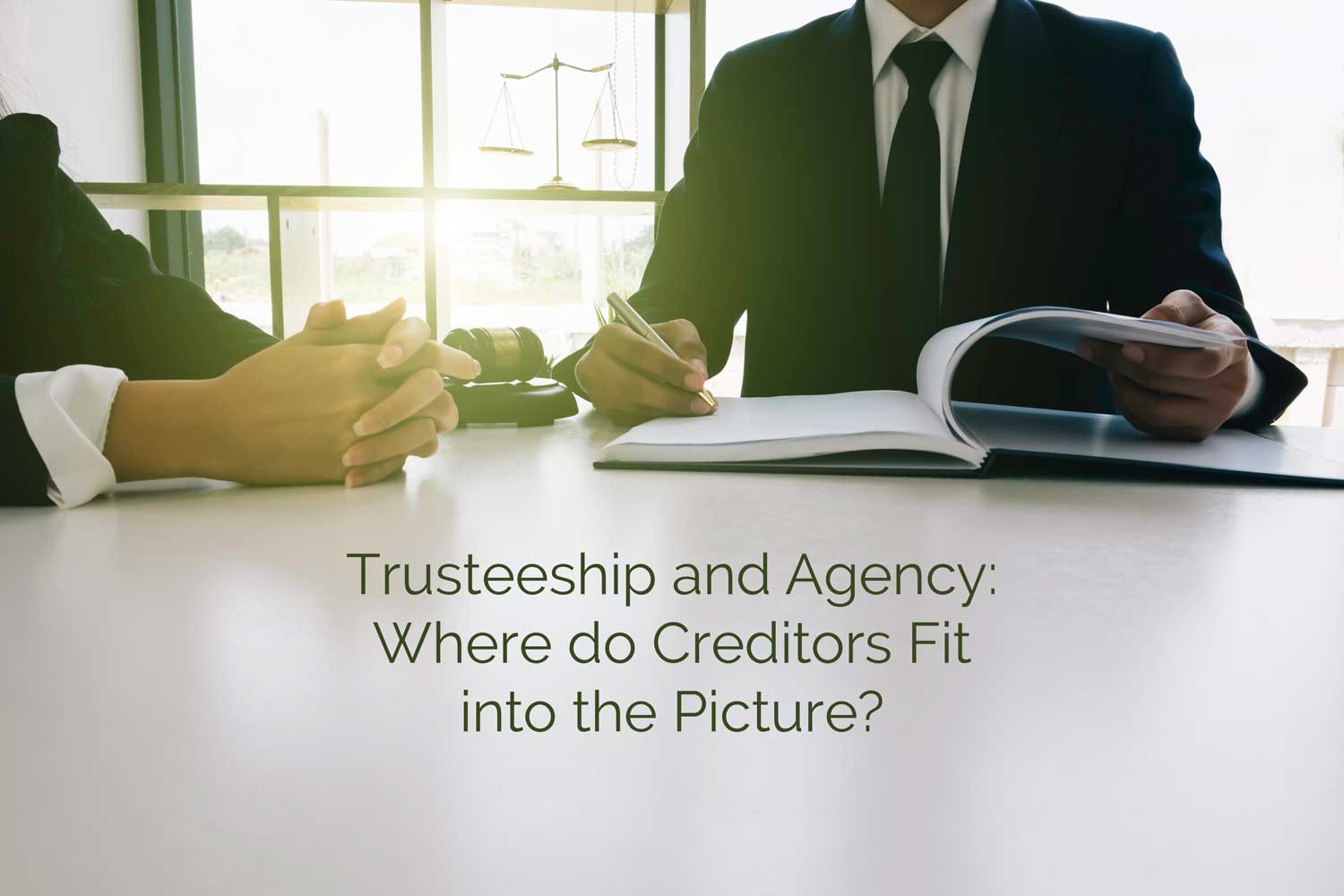 Being a Trustee of a trust is no easy task. Trust assets need to be managed, accountings and reportings need to be prepared and filed, and the trust scheme for distributions needs to be followed. Trustees also have fiduciary duties – duties of loyalty, care, and prudence. But to whom does a Trustee owe a duty? Could it be to a creditor? Also, what happens if an Agent let’s bills go unpaid? Is the Agent liable?

These issues were recently litigated in Brownell v. Johnson. Kathleen Brownell filed suit against Scott Johnson, who was her former step-son, on the argument that he intentionally interfered with her contract for alimony payments. Kathleen and Phillip were married in 1994. During the marriage, Phillip’s health took a turn for the worse and so he engaged in proactive Medicaid planning. A trust was drafted and Phillip funded the trust with all of his assets. Phillip was the initial Trustee and Scott was the successor Trustee. Scott and his brothers were remainder beneficiaries.

A few years later, Kathleen and Phillip got divorced. As part of the stipulated decree, Phillip agreed to pay Kathleen alimony of $1,600 per month until one of them died. Phillip made such payments to Kathleen until he transitioned into a nursing home. Scott, acting as Agent under Power of Attorney for Phillip, continued to make the alimony payments to Kathleen. Scott then petitioned to have the alimony contract terminated or modified, and stopped making the payments to Kathleen altogether. After phone calls and other attempts to get Scott to resume payments to her failed, Kathleen filed the instant suit against Scott, alleging intentional interference with a contract.

A modified alimony order was issued; payments would now be $600 per month. Two months later, Scott transferred all of the property from the trust to himself and his brothers, as beneficiaries thereunder.

A jury trial initially ruled for Kathleen. During the trial, Scott testified that he was aware of his dad’s obligation to pay alimony to Kathleen. But, Scott said, there just wasn’t enough money to go around. Scott appealed the jury’s verdict, and now there is the instant opinion out of the Court of Appeals of Iowa.

In the opinion, the court drew distinctions between Scott acting as Trustee and Scott acting as Agent. The court was clear that Kathleen was a creditor of a trust beneficiary. As such, the Trustee owed no duty to her. “Persons who may incidentally benefit in some manner from the performance of the trust are not beneficiaries of the trust and cannot enforce it.” Restatement (Third) of Trusts § 48 cmt. a (Am. Law. Inst. Oct. 2020 Update). The court also summarized the Restatement (Third) of Trusts § 78(1), and said “The undisputed duty of loyalty of a trustee is to the beneficiaries of the trust, not the creditor of any beneficiary.” Because Scott owed no duty to Kathleen, and because he performed his trusteeship duties in accordance with the terms of the trust, he was not liable to Kathleen due to role as Trustee. “[A] party does not improperly interfere with another’s contract by exercising its own legal rights in protection of its own financial interests.” Berger v. Cas’ Feed Store, Inc., 543 N.W.2d 597, 599 (Iowa 1996).

The court next analyzed Scott’s actions as Phillip’s Agent. These duties began a few years before Scott also acted as Trustee. And as Agent, Scott also did not use Phillips’ funds to pay Kathleen alimony payments. The court emphasized that as Phillip’s Agent, Scott was required to act in Phillip’s best interests; Scott stepped into the shoes of Phillip. Was it in Phillip’s best interests to pay Kathleen, to the detriment of having funds to pay for his own care? The court reasoned that it should not pave the way for an argument that an Agent must pay all the bills of the Principal or risk legal action. This simply cannot be the case. Instead, the Agent must prioritize the bills of the Principal. If the creditor subsequently has a contract breached, then the remedy is a breach of contract claim against the Principal.

Here, Kathleen failed to show that Scott did not act properly with regard to his duties as Trustee or Agent. As Trustee, Scott owed a duty to the beneficiaries of the trust, not to creditors of those beneficiaries. And as Agent, Scott did not have a duty to ensure every creditor bill was paid. This is good news for Trustees and Agents; their obligations to creditors were not broadened as a result of this case.