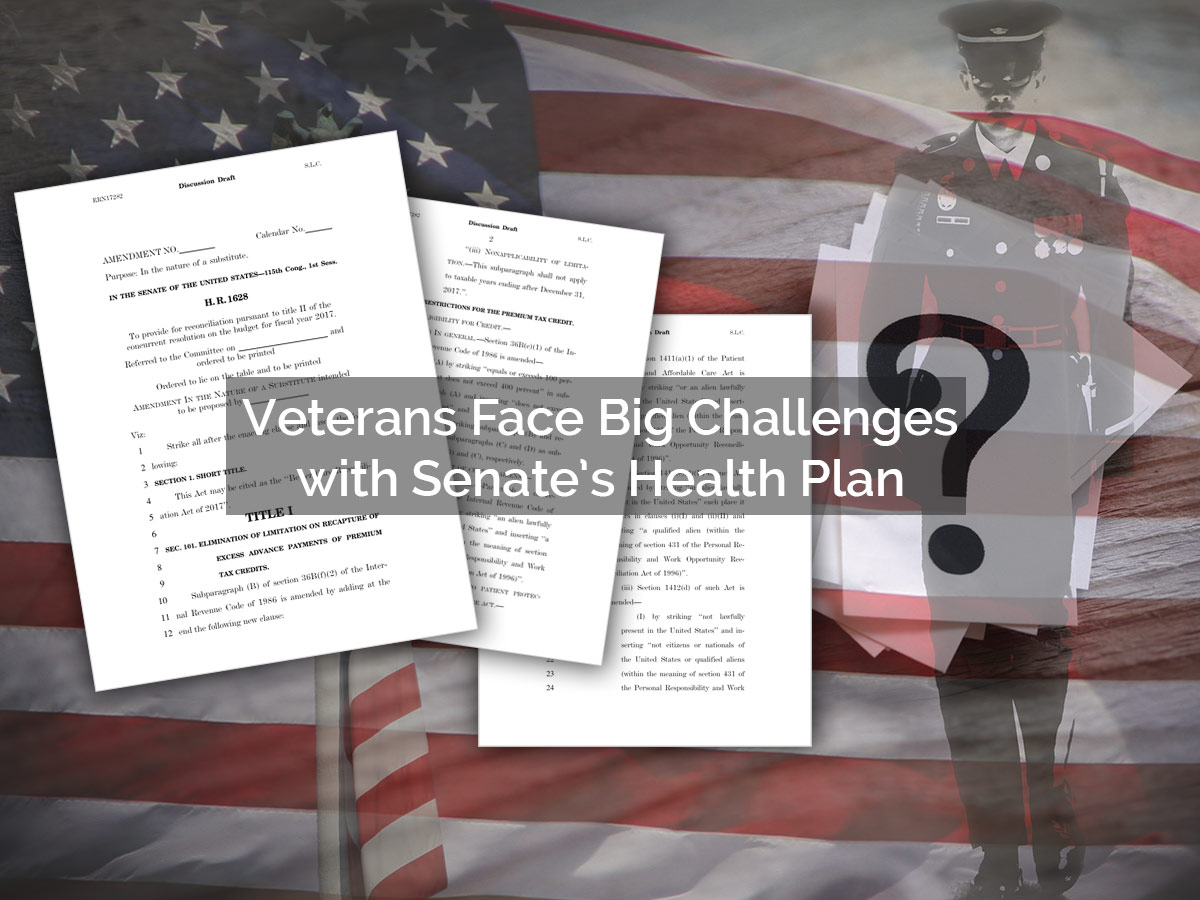 Veterans and advocacy groups across the country are blasting the Senate’s attempt to repeal and replace the Affordable Care Act, fearing that the cuts to Medicaid will impact hundreds of thousands of former soldiers across the country.  These same former soldiers are people largely supportive of Republicans, including President Trump, who had the insight to call the House plan “mean.”

There are about 22 million Veterans in the U.S. But fewer than half get their health care through the Veterans Affairs system; some don’t qualify for various reasons or may live too far from a VA facility to easily get primary health care there.  Many vets instead rely on Medicaid for their health insurance. Thirty-one states and the District of Columbia chose to expand Medicaid to cover more people — and many of those who gained coverage are Veterans.

The GOP health care bill working its way through the Senate would dramatically reduce federal funding for Medicaid, including rolling back the expansion funding entirely between 2021 and 2024.

According to Sen. Jon Tester (Mont.), the ranking Democrat on the Senate Veterans’ Affairs Committee, and other committee members, the Senate bill could:

The Republican Committee Chairman and the Trump administration had the chance to refute the data presented by the Democrats, but they did not. “As the Secretary (David Shulkin) has said, until the legislative process runs its course, we are not going to speculate on details of a possible bill,” a VA statement said. “Once a bill is agreed on, we will be in a position to review potential impacts on VA.”

Committee Chairman Johnny Isakson (R-Ga.) said: “We have been working in a bipartisan manner to improve Veterans’ access to quality and timely care. We will continue doing so and hope that Democrats’ recent attempts to politicize Veterans’ health care won’t hamper our efforts.”

The opportunities for an elder law attorney who provides service to Veterans are vast. Veterans Pension Planning, often referred to as "Aid and Attendance,” is a growing area that many elder law and estate planning attorneys are expanding into. Millions of Veterans in the United States are eligible for VA Pension benefits but many don't know where to begin with their planning.

Join us for ElderCounsel's Veterans Pension Planning Immersion Camp September 14-15 and gain the knowledge and confidence you need to add this practice area to your business. This one and a half day course will enable you to grow your practice and to provide legal services to an underserved population.

This course is on sale NOW during our annual Independence Day Sale.
Register by July 5 and receive 25% off.
Enter coupon code HAPPY4TH at check out to receive discount.